Summer 2018 is over, but good news, Agathe has stopped exploring UNESCO World Geoparks around the world for a small vacation ....... to Percé!

To our delight, she could not help but rediscover the geology of the area and some of the superb geosites of her favorite Geopark.

Let's go see what she visited! 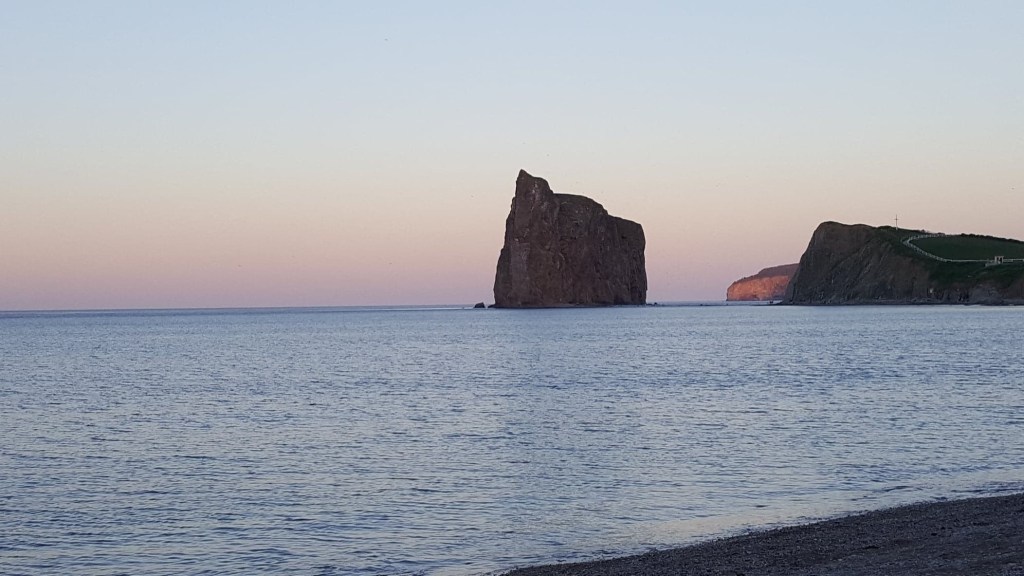 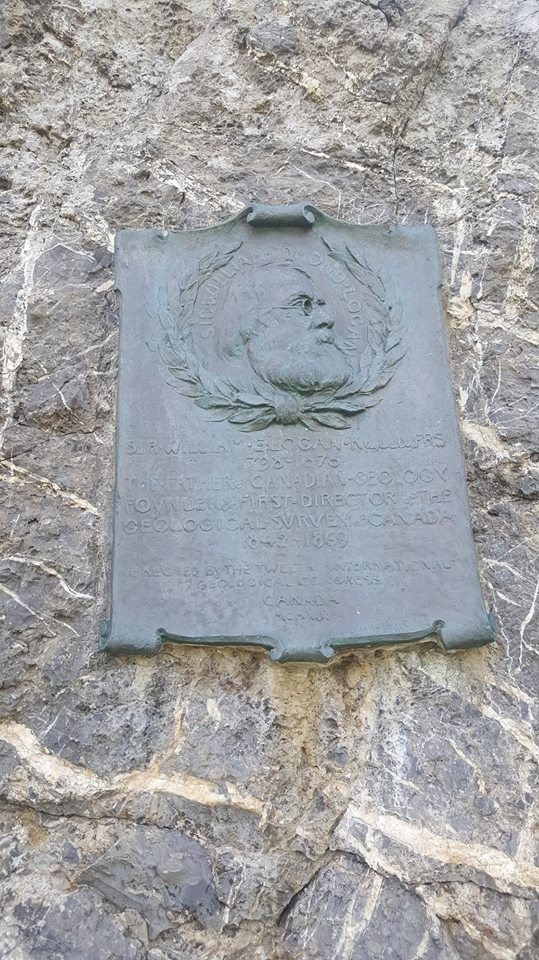 The geosite of Logan Park

There is a little known Geosite, but very much appreciated by our dear geologist, the Logan Park. But what's so special about this big rock located next to the Caisse populaire de Percé?

Firstly, this rock outcrop is one of the oldest geological formations present on the territory of the Geopark. She was trained in the Upper Cambrian, there are about 489 to 501 million years before today!

The park was also named after Sir William Edmond Logan, do you know him?

Logan is a geologist born in Montreal in 1798. In 1842, he was the first director of the Geological Survey of Canada, the oldest scientific organization in the country. It was he who designed the first geological maps of Canada and it was in Percé that he made his first field of study, in 1843.

The geology of Percé has fascinated many scientists like Agathe and Logan in history. No wonder that the inhabitants of this territory have joined forces to create an internationally recognized Geopark! 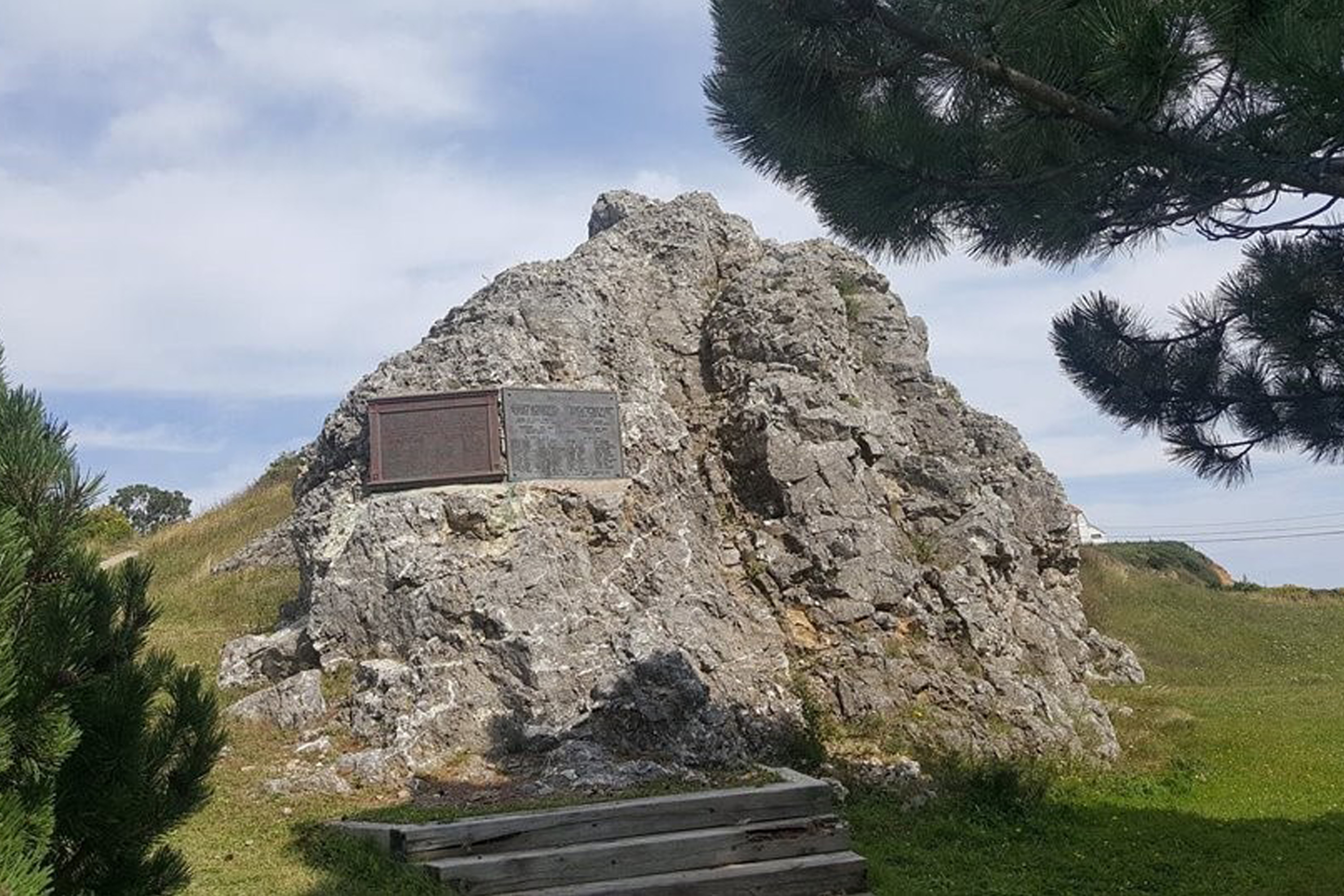 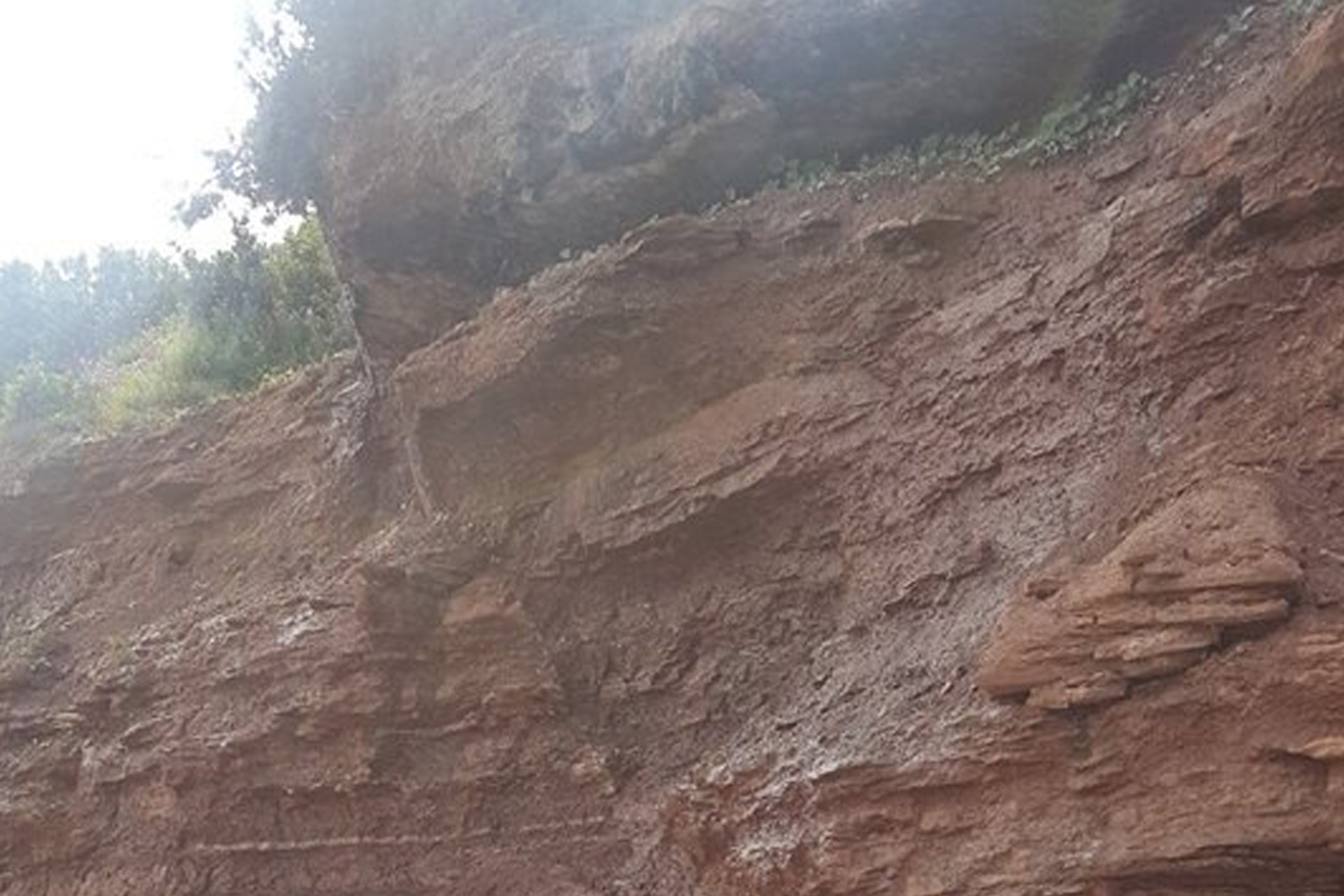 This geosite is special because it allows to easily observe a very particular geological phenomenon, a fault! It is a fracture of the Earth's crust caused by stresses or forces applied to a certain unit of volume. On this site, we can see that the different rock layers have been displaced by a break, which is due to an extensive force constraint.

By the simplicity of its structure, this normal fault is a very good tool to understand the phenomenon. It was discovered by a trainee in Geology geology, Caroline Leroy. You'll understand, the geosite bears his name!

This place is very special since it includes several geosites associated with the formation of Bonaventure. These rocks, formed about 330 million years ago, consist mainly of conglomerates and sandstones.

The Mont Sainte-Anne rock, like other rocks in the region, has undergone huge glaciers thousands of years ago. The thickness of the ice could reach 2km! It is very heavy, so heavy that weight and the erosion linked to the displacement of these huge masses of ice, have shaped the current landscape of Percé.

Did you know that ? ... A conglomerate is a sedimentary rock mainly composed of rock fragments of more than 2mm from other geological formations and bound together by a cement. These rounded pebbles contain a sample of the geological history of the region before 330 million years ago! 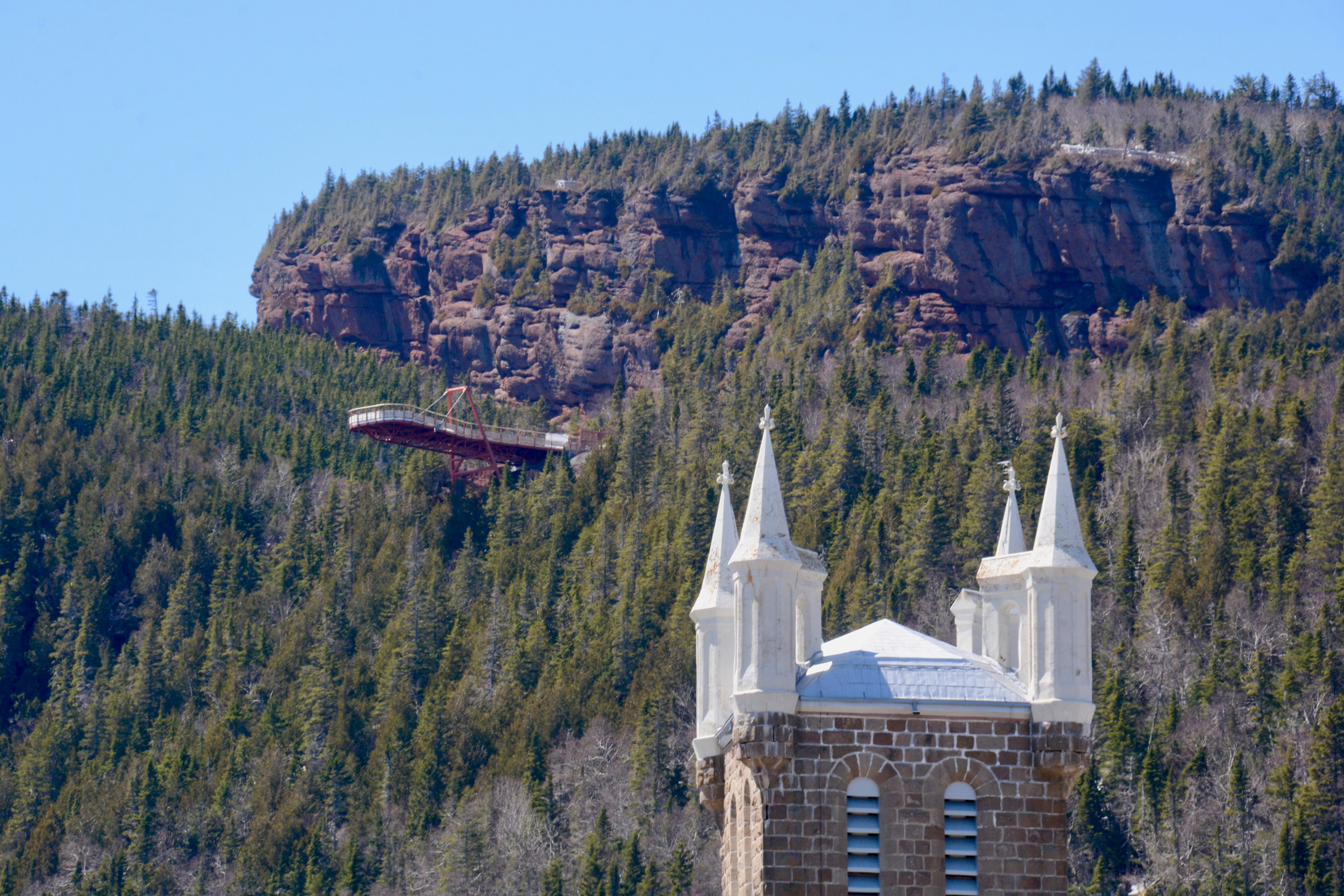 The origin of this huge cavity that develops on more than 100m is probably associated with glacier passages. Today, this cave has a very important role for the environment of Percé since it serves as shelter for a population of bats during their hibernation.

Did you know that? There are several species of bats at risk in Quebec. These flying mammals are attacked by a fungus that causes white-nose syndrome. The syndrome is still poorly understood, but the parasite that settles on the skin of bats seems to increase their waking episodes during hibernation. Bats would exhaust their resources and energies, which can lead to death. It is very important to protect bat habitats, especially since they eat a lot of insects. That's why the SOS Bat organization came to the Géoparc Mondiale Unesco in Percé last May. The organization was able to confirm the presence of bats at the bottomless hole. 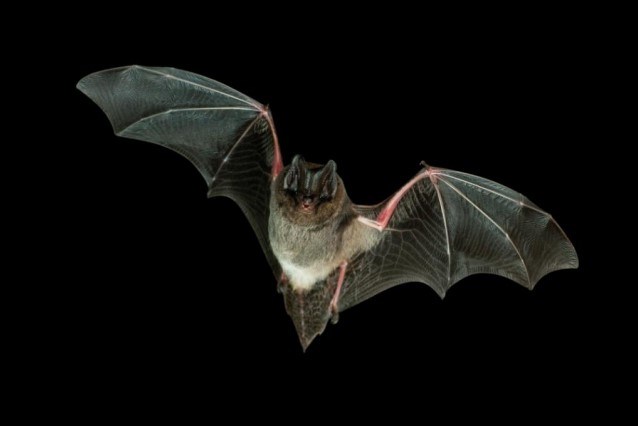 The Magic Forest is simply .... magical ! Its mysterious Harry Potter decor is directly related to the geology of the place. A cedar tree has taken its place in this canyon which probably corresponds to a collapse ditch. On the loose blocks of the cliffs that surround it, western cedar and moss carpets took place thanks to the cooler and wetter climate than in the rest of Mont Sainte-Anne. This is a nice place to take a close look at the conglomerates of the Bonaventure Formation. 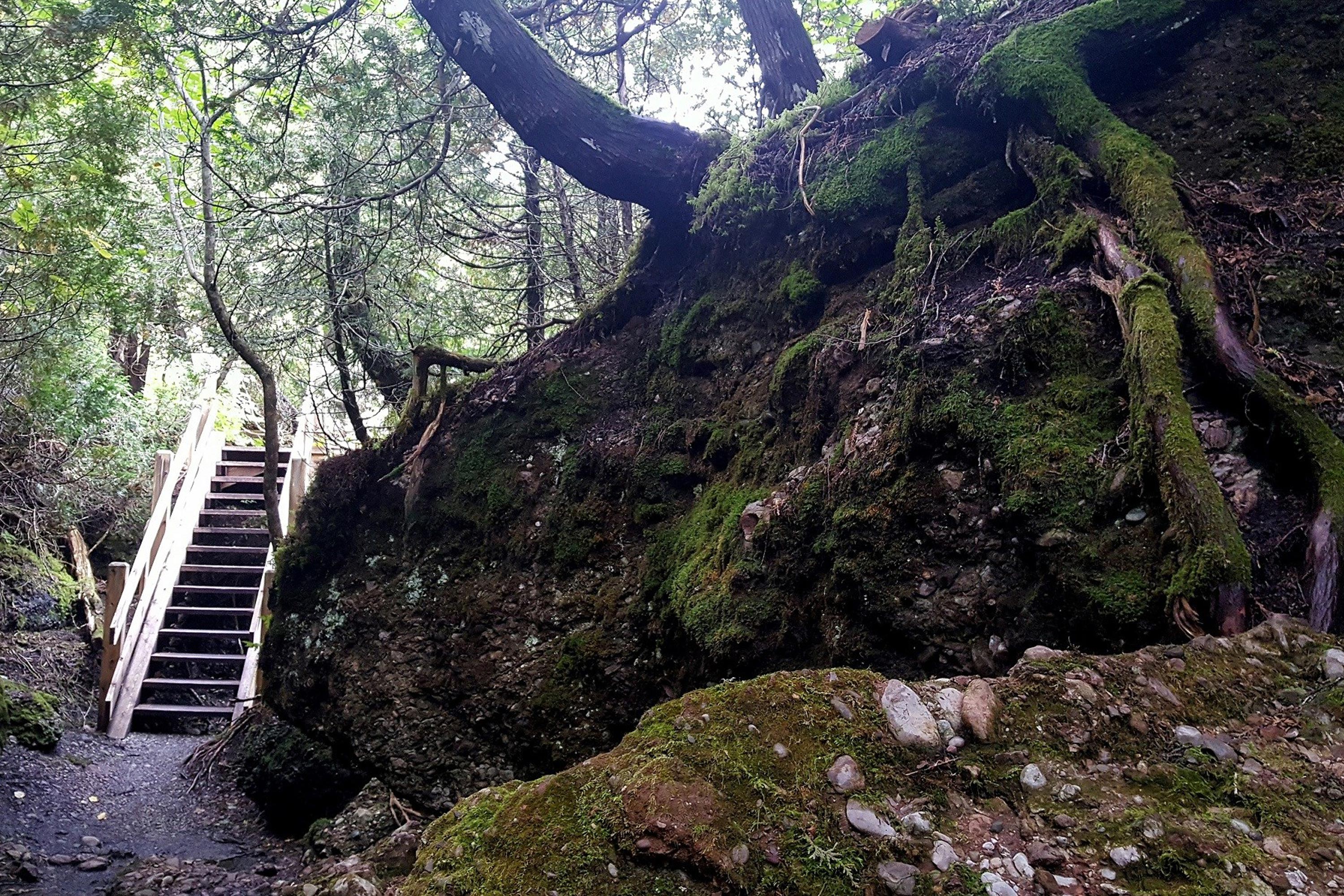 There are so many exceptional places to discover in the territory of the UNESCO Global Geopark in Percé!
And it's not over because Agathe has made sure to have allies of the Geopark on the ground, to help you explore the hidden treasures of Percé by beautiful guided hikes.

If you have questions, do not hesitate to write to me: club@geoparcdeperce.com